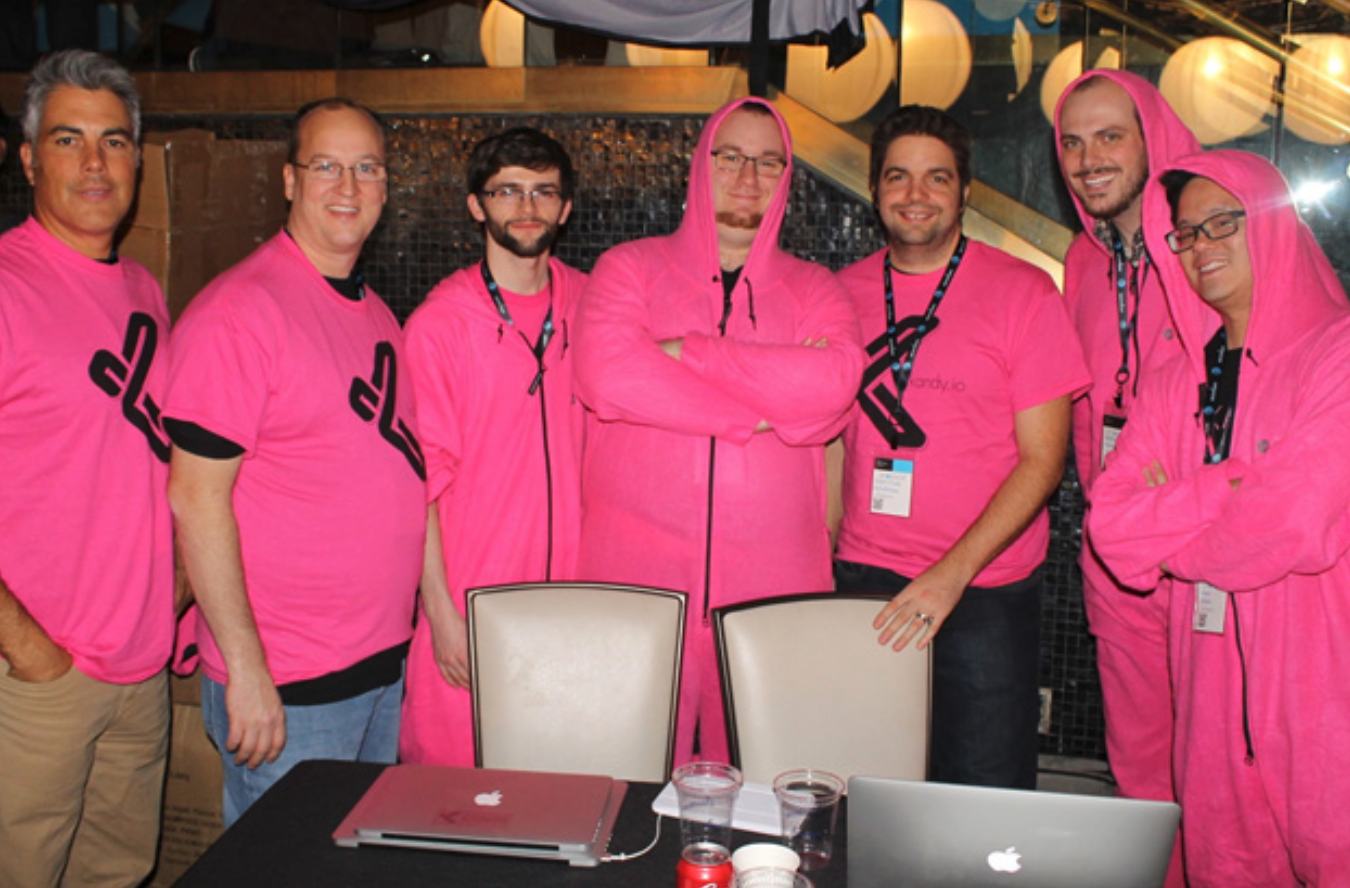 Hackathons never fail to surprise and the AT&T Hackathon at CES was no exception. This hackathon has a special place in my heart since I created the AT&T Hackathon program in 2011 and it is awesome to see it continue to grow! Developers showed up in droves to code the best apps and compete for the thousands of dollars in  prizes. I ran into many friends and familiar faces who had attended previous AT&T Hackathons at CES, from Ruggero Scorcioni who won the first-ever AT&T Hackathon to Cathy Han who won the 2014 edition and also Diana Pham who is a frequent participant in the Seattle developer scene. Even with big expectations from previous years, the 2016 AT&T Hackathon did not disappoint.

I also want to give a big thanks to Aubrie of Hosts for delivering such a consistent experience in such a massive venue and ensuring a smooth and easy experience for the developers. The food was amazing and the facilities were flawless. Additionally, another big thank you goes out to the AT&T WebRTC team (Ed Schmit, Jason Unrein, Mark Campbell, and Sayee Gurumurthy) for the cooperation leading up to the hackathon as well as ongoing efforts in working together.

A common theme amongst developers is comfort, especially with such long hours spent sitting in one place . And one cannot get more comfortable clothing than a onesie! It was very fortuitous that Kandy.io’s corporate colors are pink and for our swag giveaway at the hackathon, we chose pink Kandy onesies. To say they were the hit of the event was an understatement because everyone, including other sponsors and hackathon onlookers came by the Kandy.io booth multiple times asking for onesies. Best of all, we saw multiple developers fast asleep in the onesies in the wee hours of the hackathon. 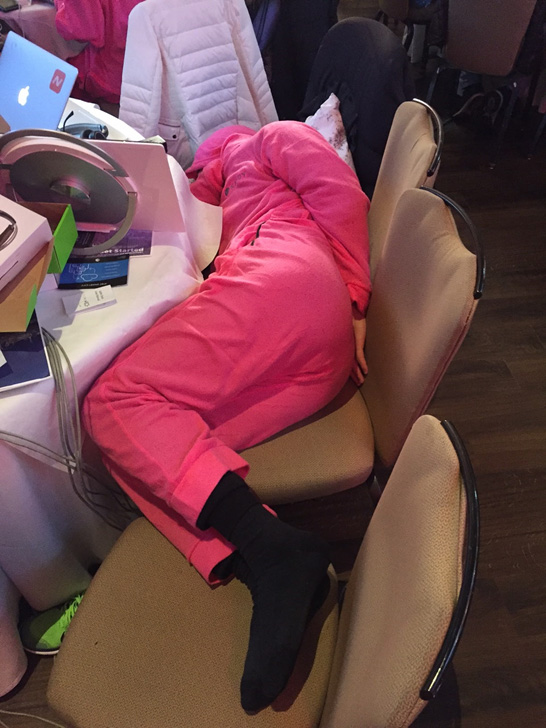 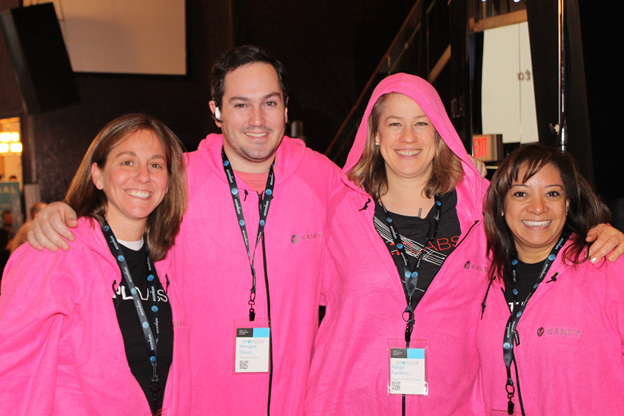 The AT&T Developer Conference was a grueling four days that included a hackathon, technical sessions and product marketing overviews of upcoming 2016 projects and ecosystems. However, the grind was well worth it with a final concert that included Billy Gibbons, Billy Idol, Fred Durst and Steve Stevens!

The $5000 Best Use of Kandy.io winner, Team Quiz.TV, took home gold because of the clean interface and demo. The pitch was well presented in a clean and methodological fashion along with a solid fundamental idea for creating the application: helping children learn more while controlling TV time. In the end, it was Eric's technical skills that earned him the gold, because he created a mobile web-app using WebRTC/ Kandy.io that runs on Android, despite Android’s limitation with WebRTC! This deployment method opens up whole new doors for developers everywhere because you don't have to learn native iOS or Android to deploy WebRTC.

The second place winner, Team ParkSmart, took home five iPads for their deployment of WebRTC to the new Raspberry Pi 2. If you conduct a search you'll find there are few publications about WebRTC on embedded systems due to slow processor speeds as well as Chromium installation issues. The team was able to get KANDY.io WebRTC running on a raspberry pi 2 and essentially recreate the ring.com door bell. Now, how cool is that?

For third place, Team MathMaestro did a fantastic job creating an app that enables teachers to remotely assist students by watching the student type math solutions in real-time. The use case is one that we can all relate to and the team received ipads for the idea + reporting additional bugs.

Finallly, Team Number5 did an amazing job in creating a robot, similar to the robot from Double Robotics, that was controlled with the Kandy.io data channel. On top of this, the team also went the harder route with native iOS applications for both iPad and iPhone.

To close out, I am raising my virtual toast to all those that came out to hack over the weekend and to a big year ahead for 2016: big data, IoT, connected car, smart cities and all the crazy hacking to come. Thank you for your continued support of the developer community and if you'd like to discuss partnering on Hackathons please find me on LinkedIn and let's talk! 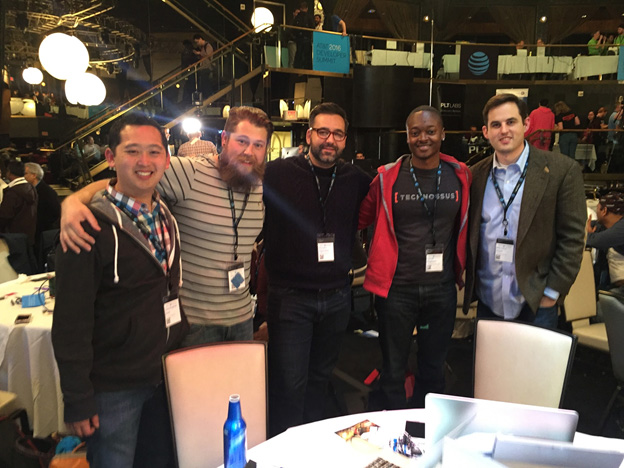 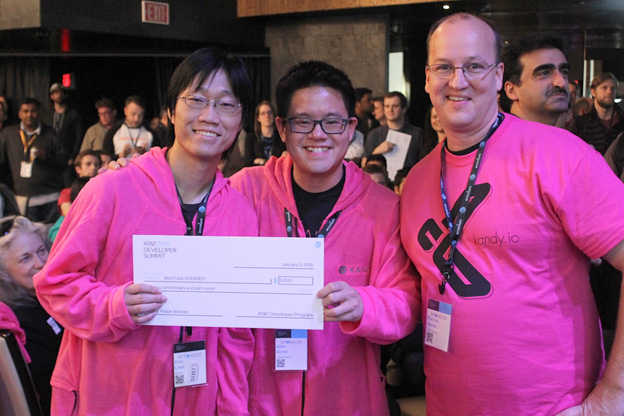 - Eric Liao is the entire team. Patrick and I were just getting in on the shot!

- We live in a world where natural and man-made catastrophes such as earthquakes, terrorist attacks and school shootings happen. Many times the response time makes the difference between life and death. The Mercury Life Saver App can help ordinary people do extraordinary things like saving lives. Imagine if you will a car accident where the driver is badly injured and having trouble breathing. What can ordinary people do to help while waiting on first responders? They can use the MLS App. MLS leverages several communication technologies to deliver an intelligent IoE application which collaborates service providers, insurance companies, hospitals, Drones and responders and victims in n-way mesh real-time communication channel using communication as a service API over the stack of SMAC (Social, Mobile, Analytics and Cloud) technology to provide instant relief ,instant insurance investigation and prevention from an accident

- Imagine being able to pop quiz your kid instead of them having to watch meanless ads on DirectTV. Now how cool would that be?

- Smart IoT devices that deploy through automatic self configuration. They provide automation and assistance for elderly, people with vision impairment, as well as able bodied users - Access for All.

- Behavior change is the toughest challenge in healthcare, patients and elders are often homebound, and very easy to fall into depression. Research shows Creative Arts Therapy (music, dance, art) improves Quality of Life by 50% and reduces pain by over 59% for cancer patients! Dancing reduces the risk of dementia by 76%. Despite these published studies, music and dance is very utilized in healthcare. Rooted in neuroscience and published medical studies, Dance4Healing is a telehealth live video dance platform, uses artificial intelligence and behavior design to provide and recommend personalized music and dance, buddies and groups for patients and elders, uses feedback from patient monitoring to record progress and suggest follow on therapies. We are leading the trend of telehealth into physical rehab space using music and dance. Our mission is to alleviate mental and physical pain, improve quality of life, accelerate patient recovery, and reduce medical cost. "

- High school graduation rates are one measure of school success, and educators and policymakers have been trying for decades to decrease the number of high school dropouts. Unfortunately, compliance with Community Classroom law (5 CCR § 10080(a)) is optional for school districts in the State of California. To assist with increasing the number of students obtaining their high school diploma, I created a WebRTC and mobile application integrated with specific APIs to play a particular role in the interface between local business and industry resources, the student’s school experience through unpaid trainee offsite, and the teacher's obligatory supervisory role. Employers can list unpaid training opportunities in alignment with O*NET occupational descriptions and identify which free UDEMY courses are required for placement consideration. Teachers, parents, and students can make use of all available resources."

- This app leverages Kandy.io to enable immediate buying within DirectTV's interface. The idea was that viewers could click a button while watching a show on DirecTV and be redirected to an agent that would help the viewer purchase the object that was just viewed. This would have been an awesome project had we gotten this to work!

- LifePulse is a home security hub which runs on Qualcomm's Dragonboard. It uses AT&T's Flow and Digital Life APIs in conjunction with the Harman Kardon JBL Pulse 2 to seamlessly provide a safe, secure, and connected smart home experience.

- Park Smart is the next evolution of parking in large lots and parking garages.  Using arrays of sensors and IoT connected devices, Park Smart tracks every parking space and through the AT&T Drive, M2X and Flow Designer platforms, efficiently directs cars to the nearest available spot.  Never circle a busy parking lot again!  We also enable full visibility into the parking lot stats and instant access to parking lot attendants through the Kandy.io APIs.

- Helpful Robotic Receptionist - Number 5 is a friendly robotic receptionist who greets visitors and shows them to meeting venues or waiting areas.  The robot moves freely in any direction to navigate corridors and uses Gimbal Beacons to ensure reliable navigation.  WebRTC teleconferencing capabilities also enable the robot to act as a communications conduit linking remote workers with on-site staff or visitors - so even travelling personnel can join meetings in a timely fashion.  In addition, number 5 facilitates home office workers, saving transportation costs too.

- Using 3D imaging to validate the face of the person at the door, the system automatically opens the door, plays music, turns on lights and coffeemaker. It sends a text message and calls 911 if someone tries to break-in.

- Our app helps take action against sexual assault on college campuses. It is an IoT wearable taking the shape of an every-day accessory (ring, earring, bracelet, etc) that is paired with an Android app. It is activated by pressing and holding the wearable for 3 seconds or more - upon activation, the victim's location and potential risk situation will be broadcasted to police and friends+family. The app will also immediately begin an audio recording of the altercation that can later be used in the victim's favor as they present their case to the university administration or legal court.

- Water flow control is a leak/flood detection to alert you if it is flooded in the basement or anywhere else in the house or building. It calls plumbers immediately or in a disaster situation it will let the First-Responders and the City know in real-time that the house is flooded to assist in disaster zones. For Water Conservation and Sustainability efforts, there are rewards given to the user. Gamification and Good Habits is not just a lifestyle, but Good Citizenship."

- Find out about the bus route to your destination. View bus stop locations near you, routes, ETA, weather, amenities, etc. Potentially, we will be including communications and additional tools in our solution."

- Educational software for teachers and students

- Don't die from texting while driving. While in the drivers seat of your car, text messaging and phone calls will not work, you won't even get a notification. Once you're done driving, you get all of your notifications.

Bonus Hound  Bonus Hound is a context aware system for supplying users of games and apps with coupons and deals specific to their lifestyle. Observations made of a user's surroundings are used to provide targeted offers upon completion of tasks or challenges. By using information about what a user actually buys and cares about, a better experience can be had by both consumers and sponsors. 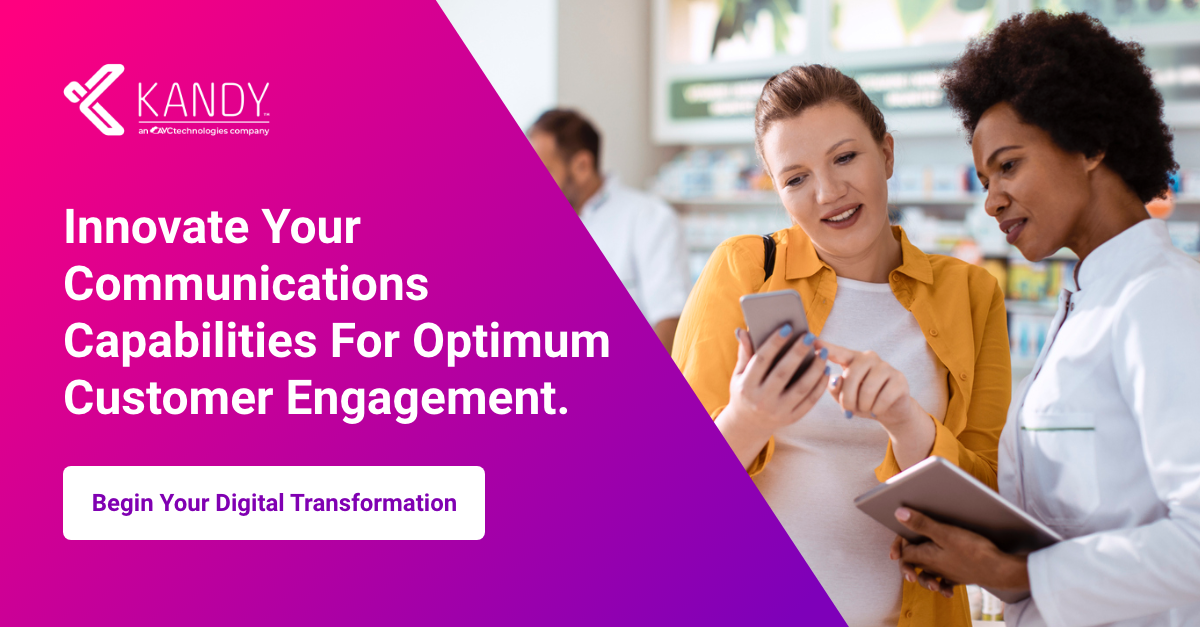 5 Ways APIs Can Benefit Every Telco

Open A Window of Opportunity to Modernize Your Voice Infrastructure.