Reflecting on a Whirlwind #MWC17

Mobile World Congress is probably conference in the technology industry right now, with more than 100,000 people descending on the city of Barcelona for four days to showcase their latest and greatest. It has become so much more than a conference. This year, I had the privilege of attending the show again to really get a feel for what’s hot in the industry and where things are going. I participated in more than 30 media and analysts briefings, so not only was I able to highlight the innovation that GENBAND is creating, but I was also able to hear directly from the folks who research and write about the trends and topics that are shaping our industry.

One of the most refreshing things that I took away from my discussions was that GENBAND’s strategic direction is right on course regarding where the industry is heading. Some of the major buzz words from this year’s conference were definitely IoT (Internet of Things), 5G and NFV (Network Functions Virtualization) and all are areas where GENBAND is carving out a unique leadership position.

We had a ton of positive feedback on our Kandy IoT demonstrations and heard from several analysts that to their knowledge no one was really talking about IoT from a “Human Connection” to Real-Time Communications capabilities perspective. As our CEO David Walsh so perfectly described in a recent press release, ““Without the human element in IoT you are left with just “Big Data” and “Things” and that is why the intersection of IoT and human interaction is so critical. Adding context to the data from multiple connected end-points or “Things” gives businesses the ability to respond in real-time in the most relevant manner according to the circumstances and dynamics of the situation being addressed.”

Kandy, our award-winning communications platform that easily adds messaging, voice, video, presence, and collaboration capabilities directly into mobile and web apps, has been enhanced to deliver the “human element” to IoT connectivity via contextual Real-Time Communications solutions. It easily “Bolts On” to a service provider’s network to bring together Real-Time Communications with IoT. What is also really cool and unique about Kandy is that with its Messaging and IoT apps, chat bots and developers can connect to the platform through its advanced APIs to provide innovative user interactions for multiple industry verticals and consumer apps, using bot automation for routine tasks and seamlessly escalating to human conversations for more complex activities.

Another topic that we heard a great deal of positive feedback on was our great progress on NFV. We were able to highlight leading UAE-based service provider du’s deployment of our NFV-based Session Border Controller for interconnect and transcoding capabilities. This deployment was the first of its kind in the Middle East. du is leveraging our media processing and independently scalable signaling capabilities, which are some of the most advanced on the market. Our VNF Manager, which provides lifecycle management of both GENBAND and third party VNFs, and contains features to enable operators to realize the CAPEX and OPEX benefits of NFV, also plays a key role in NFV deployments.

Our geo-distributed SBC Virtual Network Function (VNF) running in du’s cloud combines with our Advanced Media Software (AMS) on an in-network Q50 platform in a hybrid deployment environment to offer the service provider high network resiliency and the opportunity to future-proof its network via a seamless evolution path to a fully virtualized cloud environment – all while  moving at their own pace.

During the whirlwind that is MWC, I also had the chance to participate in a TIA Now NFV panel discussion with GENBAND ecosystem partners Hewlett Packard Enterprise (HPE), Wind River and Intel. It was a great discussion that offered some unique insights on where we are in the industry, as it relates to NFV deployments and trends. Check out the video below.

Enhanced Voice Services (EVS) codec is another area where I feel we really differentiated ourselves from other solutions on the market.  EVS allows service providers to offer ultra HD Voice quality over their mobile networks, while optimizing VoLTE spectrum efficiency. Our VoLTE media processing and transcoding solutions, which support EVS, have already been deployed by several leading tier-one service providers and serving more than 150 million subscribers. 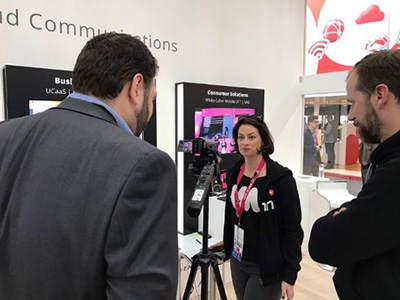 Our immmr announcement also created quite a bit of interest from not only media and analysts, but also from other customers and prospects who are looking to create new revenue streams and customer stickiness in today’s super competitive marketplace.  Deutsche Telekom’s immmr is an innovative communications service providing a new voice and video calling experience as an Internet communication service. With Kandy as part of the immmr architecture, the service offers an integrated, real-time communications experience from the cloud allowing anyone to communicate anywhere, with anyone, on any device and any network.

By moving mobile communications into the cloud, immmr allows users to leverage a mobile number from any device and without being tied to a specific SIM card, opening up a new era of digital communications. We were fortunate enough to have immmr’s CEO Judit Andrási, who also gave a keynote at the conference, in our booth meeting with our leadership team and discussing why immmr chose Kandy to power their new offering after an extensive evaluation period.

These were just some of the highlights that really stood out for me based on my media and analysts briefings. Again, it was really gratifying to know that GENBAND is continuing its reputation of introducing disruptive real-time communications solutions to the marketplace that are really helping service providers protect their current investments while investing in the future.

I would be interested to get your takeaways from the show, since I didn’t get to see a whole lot outside of our booth!